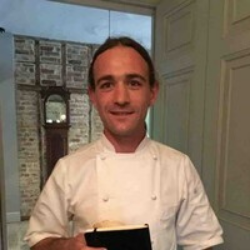 Daniel Gavriilidis - The Pig at Combe

Daniel Gavriilidis is head chef of The Pig at Combe. After starting his career as commis chef at Charlotte’s Place in Ealing, Gavriilidis went on to work at Tom Aikens restaurant in Chelsea, followed by two years as pastry chef at the two Michelin-starred Pied Á Terre in Fitzrovia. He was later appointed junior sous chef at Bonds Brasserie in Marleybone and then chef de partie at the Greenhouse, Mayfair, before moving to the Westbury hotel.
After 10 years in London, Gavriilidis relocated to Bath in 2014, where he joined the opening team at the Pig. Gavriilidis is now head chef of the 27-bedroom Pig at Combe, located the Otter Valley near Honiton, Devon.