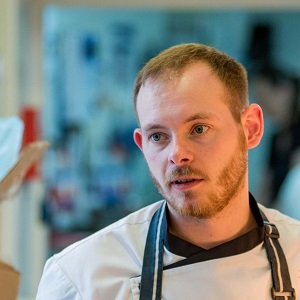 Tom began his career doing work experience at ODE True Food in Shaldon, Devon, under the supervision of Tim Bouget and shortly after gained a year further experience at @bode Exeter, under Tom William-Hawkes and Michael Caines whilst at college. He then took a Chef Du Partie role at the Edgemoor Hotel, Bovey Tracey in 2009 and stayed until 2011 before returning to work with Tim in Shaldon. Whilst there the group won and maintained the SRA Sustainable Restaurant of the Year Award 3 years running, a passion which is still close to Tom’s heart.

At the beginning of 2014 Tom found a position under Mathew Peryer at Lewtrenchard Manor, and swiftly worked his way up the ladder to sous chef withing 18 months. Mathew and him have worked closely from then until now, a deciding factor in Tom receiving the offer of Head Chef in 2018. An offer he instantly accepted.